Recently, I had the opportunity to speak on the topic of “Games, Gamification and Innovative Learning Techniques” at the ATD China Summit held in Shanghai, China. The summit was a wonderful blend of international speakers, representatives from some of the largest learning companies and organizations in China and ATD leaders. The variety and range of speakers provided insightful and thought provoking ideas about learning in China and around the world.

The summit was hosted by ATD (Association for Talent Development) and HRoot which is the largest human resource media company in China.

The trip started from Philadelphia and traveled through Chicago. The Chicago airport was all decked out for holidays. Chicago airport decked out for the holiday season.

It was a long flight over 13 hours but I was able to track the progress of the plane both via English and Chinese. We flew up over Canada and toward the North Pole. Flying due North to get to China.

When I arrived in China it was actually a day later than when I left due to the 13 hour time difference. I arrived at my hotel and slept for a while. Saving sightseeing for later. View from my room. A big smoggy but not as bad as Beijing.

The next day I took a walk around and found some interesting sites. Including an interesting Pac Man Cafe which was closed at the time. I meant to return when it opened but never made it. I thought it would be a great place to visit and talk about gamification-it doesn’t get much more appropriate than the Pac Man Cafe for taking gamifiction. I also met up with the ATD team for dinner and had a chance to meet Kimo Kippen, Chief Learning Officer, Hilton Worldwide. Hilton is undertaking some really interesting mlearning initiatives and working to provide on-the-go instruction to associates worldwide via mobile solutions (and when I say mobile, I mean phone…not tablets). At the authentic restaurant, right outside you could see who you would be eating as they were all contained in tanks for your viewing.

Tanks of fresh ingredients for dinner. First up Stella Chang of DDI introduced the conference and got everyone excited about the two day event. Also helping to moderate the event was ATD’s own Wei Wang who manages ATD International Partners from more than 20 different continues. Wei provided good information about logistics and helped to distribute prizes in various categories to outstanding examples of learning excellence such as the Internet-based Operational Technical Training System by China Post Group and the Mobile Learning-Drive Blended Learning by China Mobile.

One thing I quickly learned the was the app of choice in China is WeChat. Since people in China do not have access to Google products (including email which was tough), Twitter or Facebook…the main social media tool that everyone was using was WeChat WeChat was created by one of China’s big three technology companies Tencent. The other two are the Chinese version of Google called Baidu (learn more here) and Alibaba which is an online retail site selling, banking services and market place which connects buyers and sellers (learn more here).

In China, every company in the learning and development space and their clients were discussing mobile learning. In fact, one person told me eLearning was “dead” in China and the main focus was on mLearning and often some of the training is even being delivered by WeChat in small chunks and pieces.

However, one big exception was a board game company called Game Solution. They have several board games teaching basic business skills like reading a profit and loss statement as well as games to teach sales skills. They have over 90 board games they’ve developed. I had the good fortune of hanging out with Arslan Dorman, the Managing Director of Asia for Game Solution and talking with him about game-based learning and the advantages of using games for learning. And, yes, we did discuss over drinks:)

So the two primary types of learning delivery in China are face-to-face instructor-led and mobile learning and, often, a hybrid of the two is the approach that is taken. Tony Bingham, President & CEO of ATD, presented a compelling case for why innovations such as sensors in clothes, 3D printing and the Internet of Things are going to drive innovation and learning in our industry and how CEOs need to be open to innovation or risk becoming obsolete.

He then participated in a panel discussion with Kimo Kippen and Professor Shen Xiaojie, the VP of Special Projects Volkswagen, (China) in a discussion about talking to the C-Level and driving change through talent development and how the focus needs to be on the value and impact to the organization and how talent development specialists are in a unique position to drive innovation within an organization. On the second day, I had the opportunity to talk about how games can be used for learning and how parts of games–gamification can be used to drive engagement and especially how they can be used in a mobile setting. Then, to my surprise, one of my former students stopped by after my presentation and let me know that she has a company that has designed all types of mobile learning including game-based learning. her company is Seven In Learn. She had done a number of game-type apps. Here are some sample screen shots she created in her company. She has some large clients and is expanding her client-base quickly. She and I then went to dinner on top of “The Pearl” which, until recently, was the tallest building in Shanghai. Karl Kapp and Ivy Sun at the ATD China Summit. Karl Kapp and Ivy Sun at the bottom of The Peal building in Shanghai. The Pearl is the building with the round bulb. The building to the right in now the tallest in Shanghai. It was not yet open. View of center city Shanghai from The Pearl. The Pearl building, up until recently, the tallest building in Shanghai.

On the second day we had many wonderful speakers. One of which is from my home town Pittsburgh, PA (it really is a small world.) Tacy Byham of DDI spoke about what it takes to be a great leader. At the conference, I met many wonderful people. It was great to see the common goals and ideas that we all have around the world about learning and instruction. It is exciting to see how gamification is gaining traction in the world of learning across the globe and wonderful to have some of my work serve as an influence to some of thinking around gamification in China. I had several folks tell me they’ve read my gamification book in English. Fortunately, it has also now been translated to Chinese so it will be even easier to understand for learning and development professions within China.

Here is a slide explaining the time frame of the translation of my first gamification book and the gamification fieldbook. (I am not sure what it says since I can’t read Chinese.) Thanks to my translator Lance Chen! The explanation of when the books will be translated.

The best part was meeting all the wonderful people. All in all, it was a great conference and I look forward to returning to China in the near future.

Posted in: Games, Out and About 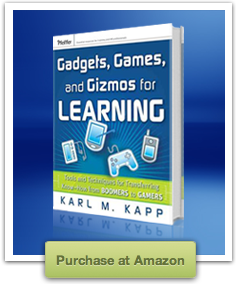