A Conversation with John Blackmon of Trivantis

The other day I had a chance to catch up with John Blackmon. John is the Chief Technology Officer for Trivantis as well as being one of the Co-Founders of the company. And before that, John was Co-Founder and Lead Engineer at BocaSoft, a company that created various software utilities for the OS/2 operating system. John began his career at Electronic Data Systems, where he designed a number of automatic identification systems using various technologies for plant floor applications. John then spent time at IBM, working on plant floor data collection, and then design work on the OS/2 operating system. At IBM, John was awarded a patent for his work on seamlessly running Windows applications under the OS/2 operating system.

John is responsible for all aspects of development and strategy for Trivantis’s eLearning products. Trivantis has a number of online learning development tools including Lectora Online, Lectora Inspire and Lectora Publisher as well as CourseMill, CourseMill Mobile and ReviewLink.

John is the original developer the Lectora product line, which is the flagship product of the company. And he regularly speaks at various eLearning industry events on topics ranging from xAPI to Responsive Design, and has a patent pending on his work for Responsive Course Design. I was excited to hear his answers to my questions about Lectora and the industry.

Here is part of the conversation.

Kapp: The Lectora product was first produced and released in 1999 by Trivantis Corporation and has seen a lot of changes in the industry. What are some of the biggest changes the company has seen since the first release?

Blackmon: The move away from Flash for eLearning was much faster than most had anticipated, mostly fueled by the rise of iOS devices. Although Lectora never used Flash as a publishing format, it did use many Flash clips for interactions and media, so many changes had to be made to accommodate the difference.

The move to mobile learning has also been a large influencing factor over the design of our product line. Every design needs to be aware of a much greater number of form factors and input types. We are now seeing another disruptive industry shift, growth in the cloud authoring sector, as eLearning developers are seeing the benefits of collaborative multi-platform authoring.

Kapp: Obviously, Lectora has adapted to the changing technology around eLearning development, what are some of the latest adaptations and changes Lectora has incorporated into the product?

Blackmon: Responsive design has been the biggest game changer recently. We’ve come up with an entirely new way of producing responsive content, which has been getting rave reviews in the industry.

xAPI and cmi5 are technologies that are really just establishing themselves now, and will change the entire landscape of what information eLearning content will be able to track and feed back to eLearning developers. Lectora was among the first tools with xAPI compliance, and is recognized as one of the best today.

Kapp: What is one thing that would surprise people to know about Lectora?

Blackmon: Lectora was initially called Athena, and was intended to be released with that name. The files that Lectora creates still bear the name in their extension AWT, which stands for Athena Windows Title.

Kapp: What do you see as the future of eLearning and authoring tools?

Blackmon: I believe that all of the products used by an eLearning developer, from authoring and review, to delivery, will be cloud based in the next few years. There are so many advantages to cloud based tools that just don’t work in a desktop format.

A bit farther off, augmented and virtual reality will play a large part in simulation based eLearning. There’s no better way to capture a student’s attention than by throwing them right into the virtual world where they work with the skills they need.

Kapp: What advice would you give to someone just entering the field?

Blackmon: I would tell them to be prepared for a career in which you never stop growing. ELearning is a fast paced, ever changing landscape that will constantly keep you challenged to stay ahead of the curve.

Posted in: Out and About 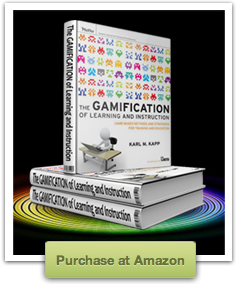