There is an important difference between games that teach a learner how to do something and games that test what a learner already knows. Too often those two types of games are confused and an instructional designer or other person places the wrong type of game into the curriculum.

Testing Games are games where the learner already needs to know the information to be successful. The focus of the game is not to apply knowledge but rather to recall knowledge. Good examples of testing games are Trivia games (where the person that knows the most usually wins) or games like Jeopardy!, matching games, games where the person is answering a multiple choice question and something happens as a result. Games where a person identifies items or parts of a piece of equipment. They must know the parts already before they identify the items.

It’s not that testing games are not appropriate, its that you need to understand that games based on the recall of previous knowledge do not do an effective job of teaching new knowledge. Sure, you can watch Jeopardy and pick up a new fact or two or play a trivia game and learn some trivia but the process is not efficient for learning and learning outcomes are not always a direct outcome. A testing game, when it teaches, is teaching “accidently.” A learner decides to memorize one interesting fact over another and may not learn everything that is contained within the game.

If you want to test knowledge, testing games are fine but do not expect learning to occur.

Teaching games, on the other hand, do not test knowledge they impart knowledge. This is accomplished through a series of activities within the game that teaches the leaner what he or she needs to do. For example, in a game designed to teach negotiation skills, a player might first be given advice on how to negotiate and then given a small negotiation task. During the negotiation, the player could watch the reactions of the non-player character in the game to determine if the negotiation was going well or not and then adjust inputs to make the non-player character happier with the negotiation. A teaching game helps the player to adjust behavior or attitude based on the input they are receiving from the game environment and players in the game.

When creating a learning game, its important to match in-game activities with the skills you want to teach. The chart below illustrates and attempt to match game-play, learning objectives and assessment to determine the best combination.

Testing games, in many ways, are easier to add to a course or curriculum but to have a learning impact, you need to work on designing games that teach. 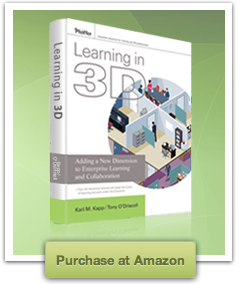