A new music distribution model has arrived (about time for the music industry) and it’s called Rock Band.

In fact according to an entry on Joystiq, the new Mötley Crüe single was downloaded on Rock Band five times more than on iTunes

According to data provided by the band’s management, Tenth Street Entertainment, the Mötley Crüe track was downloaded more than 47,000 times via the Xbox 360 version of the game in the first week after it became available….By comparison, the same track received slightly more than 10,000 downloads via digital services like iTunes and Amazon…a pretty big discrepancy considering that music bought via “Rock Band” can’t be transferred to a portable music player or even a computer for later enjoyment. It can be played only via the game. 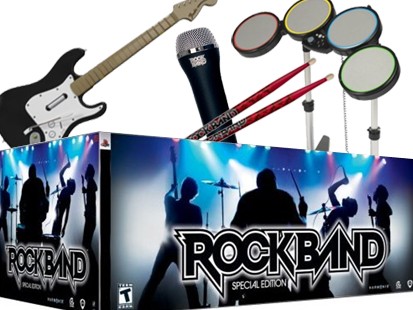 Allen Kovac, CEO of the band’s management company Tenth Street, says, “the resurgence of rock has happened because of ‘Rock Band’ and ‘Guitar Hero, and the reason is because of the interaction with the audience. The more music marketing people look at interaction with the audience as opposed to only radio or a video, the more lasting the experience will be and the longer the artists’ career will be.”

Interaction is the key to the new model of music distribution, people want to interact with information, music and ideas, they don’t just want to passively listen…sound familiar?

I’ve written about this intesection of interaction and music before in Kapp Family World Tour and My Wife…Guitar Hero!

We should all take a page from Mötley Crüe (can’t believe I just wrote that) and consider how we can make our content more interactive and less passive.